Hi folks, has anyone experienced any leaks in their Zoe in heavy rain?

It has happened in mine twice recently from the driver door seal and just wondered if it was a known manufacturing fault. 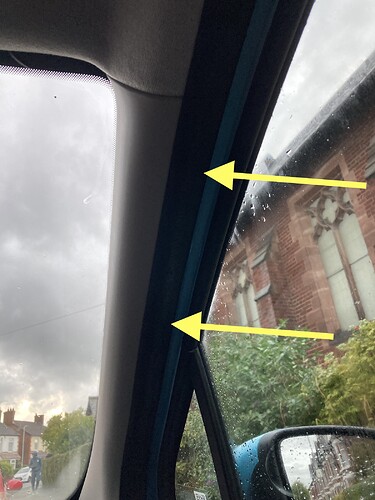 Renault have replaced the seals on mine twice and still leaks.

They have also re-seated the doors but they still leak. I’ve sort of given up bothering to get it fixed now.

Apparently it does affect some cars. Best to let onto know and get it booked in to be looked at.

My first EV was Zoe in 2018. Most unreliable/ poor quality car ever. Back in 2018, Zoe have the same problem. I am very surprised that people still go for it. The worst car you can have. Constant issues.

The worst car you can have. Constant issues.

The most popular car you can have in the Onto fleet, with very good value for money, and overall a lot of satisfied customers.

Remember that Onto have literally thousands of these in the fleet now, and have offered them for years now. If they were as bad as you say, the Onto community would be full of complaints about the Renault Zoe one after the other. But it’s not. It’s just around the same percentage of issues as any other model scaled up in line with the amount of them they have.

In terms of the ZE50, there were teething problems when it was first launched and some cars did have a leaking door seal, creaky rear hatch hinge, and an issue with remote control and timers for charging and climate settings. But these were pretty much all corrected early on and you would be particularly unlucky to get such a car today with any such issue.

Are there better cars? Absolutely. The Ioniq for a very similar price is a WAY better car imo. And I would recommend people pick one of them over a Zoe all day long. But does that make the Zoe a crap car? Not at all. They make for great affordable starter EVs.

Completely disagree. I w
Own 2018 model for 2.5 years and know very well how badly this car made. Plus lets not mention the worts even Renault Customer Service. Zoe gives you an allusion of good value for money! Even vehicle safety is unbelievably shocking. 0 stars out of 5 .
Euro NCAP’s latest round of gruelling vehicle safety tests with a total of zero stars out of five.

Own 2018 model for 2.5 years and know very well how badly this car made

Owning is a very different experience to subscription and surprising to hear you have kept it for so long if it’s been problematic too. Dealerships vary widely with their abilities nationwide so best to use another if yours is not up to scratch. That applies to premium brands too.

But as with all manufacturers there is always a small percentage that have issues, whereas the vast majority have next to no issues at all.

There are many thousands with Onto and other sub/lease/etc. that have no issues with a Zoe which will be newer models than the one you have.

Personally I thought the Zoe was a fantastic car.

Only returned it for something larger. My Zoe has absolutely no issues at all.

There a THOUSANDS of Onto Zoe’s on the road. Is it that mind blowing to think there might be a handful that aren’t perfect?

Nothings perfect. Not even premium cars.

Yes, get the leak on mine too at times. I just keep an eye on it so that it’s not too much of an issue. Seems as though it’s a design fault really in how the door bends over into the roof line and so any rain goes straight down the gap between the roof and the door and then onto the rubber seal. The vast majority of cars are designed with a roof that goes over the door with no gap and so it isn’t likely to cause problems. I also keep a small cloth nearby when driving to wipe up the very occasional few dribbles that do occur. To me it’s not such a big deal and doesn’t ruin my enjoyment of using the car.

I found the advice given on some other forums is to make sure the rubber seal is nicely clean and the channel clear of tiny bits of debris so that rain can run away quickly. Also keep the contact face between door and seal clean. Some advice was to use a silicon based cleaner but I’ve steered away of doing that.

Just wanted to add - last time I went to Renault apparently there “was a service bulletin regarding the doors on this vehicle” and that’s when they aligned the doors.

It’s still leaking, and did last night in the pouring rain - I’ve told Elmo about it, if they want it fixed they can take it themselves, otherwise the door card and window controls are going to keep getting a bit damp.

Just to add a positive spin to the Zoe. The ZE50 GT Line we have had for just over a year has never had any leak issue from the doors and our driveway faces the prevailing winds, is facing open country and takes the brunt of the weather and storms we get.

Not had any issues with the car other than a couple of minor delivery issues which got sorted by our local dealership promptly.