I have now had CCS charging issues three times in a row.

Fail One: Returning from Cornwall, we stopped at Solstice Park Services with 24% SoC and started charging on a Polar Ultracharger at the Holiday Inn. At about 40%, charging stopped, and I had to reconnect from scratch. When going through the checks, the Rapid could not detect the vehicle. I tried several times, and the same issue occurred.

Fail Two: I moved Zoe down the road to the other Ultracharger situated in the Harvester car park. Again, the Rapid could not detect the vehicle and failed to connect. After several attempts, I used Type 2 AC to charge to 60% and then left.

Fail Three: Having arrived home with 5% SoC, I decided to try a local Polar Ultracharger the next day. Everything started fine, and I stayed with the vehicle until it reached 40%. I then went to a local shop to buy a few items, and on my return found that the charging had stopped at 53%. As it had started raining heavily, I didn’t try reconnecting.

I’ve not read of anyone else reporting this issue, and as I used three different Rapids, I’m assuming it’s an issue with the vehicle. I’ll maybe try again tomorrow, perhaps on another network, to see if this problem repeats itself.

Seems like Renault might have some production issues to sort out on a number of different items. Quite a raft of issues being reported in a very short space of time.

Keep an eye on the Z.E. Lights above the charging connection, I had not noticed it was red having my charging issues.

In someways, seeing more experienced EV drivers have issues does point to the cars… And as a newbie to EV’s I was having this nagging thought it may be my technical ineptitude.

I don’t know why this matters, but when you have this problem in future close the charrging flap, switch the car back on, put it into gear, and then back to N and switch off again. Try charging again and it won’t give you any communication issues. I’ve even had a CYC Ultracharger work (on the second attempt) so it does seem to help in my experience compared to the repeated failures before.

I’ve had CCS issues too, all but two of my charges so far failed at some point, mainly on Polar units and CYC. My most successful, problem free, CCS charge was on a PodPoint rapid. Such a pain and really poor especially considering CCS is an extra on Zoe models.

Currently rapid charging on engenie network from 65%, first time on ccs and so far 10% charge in 8 mins. Fingers crossed!

Update…Zoe 100% charged from 65% in 45mins. Not quite as advertised but its charged.

EVs don’t rapid charge all the way to 100% and it generally isn’t considered good practice to stick around at one trying to do so. Charge to about 80% or so and then unplug. If you need more than that, then just charge on AC - As you get closer and closer to full it gets slower so there isn’t much time difference there anyways.

The ZE50 Rapid charges fastest when you plug in with a low state of charge. When you plugged in already at 65% it will already be quite slow and only get worse from that point forwards. Take a look at the link below to see the rapid charge curve:

Charging with a Renault ZOE (CCS)

(Apparently a software update has improved this a little, but the general idea is the same)

I’m experiencing the same issue. Successfully charged two times with CCS on two different polar network units but on the third attempt at a separate one, it charged for about 30 minutes before disconnecting. Same issue as E7EV… could not reconnect and would not detect vehicle during checks. Switched to type 2 AC and it worked fine.

Have tried CCS at various other Polar and CYC points since then but not luck. Have had to use type 2. Frustrating! Any tips welcome

Have tried CCS at various other Polar and CYC points since then but not luck. Have had to use type 2. Frustrating! Any tips welcome

Shouldn’t need tips, it should just work. ONTO need to bring their influence to bare, either on BP Chargemaster or Renault. They must be the biggest customer of both. 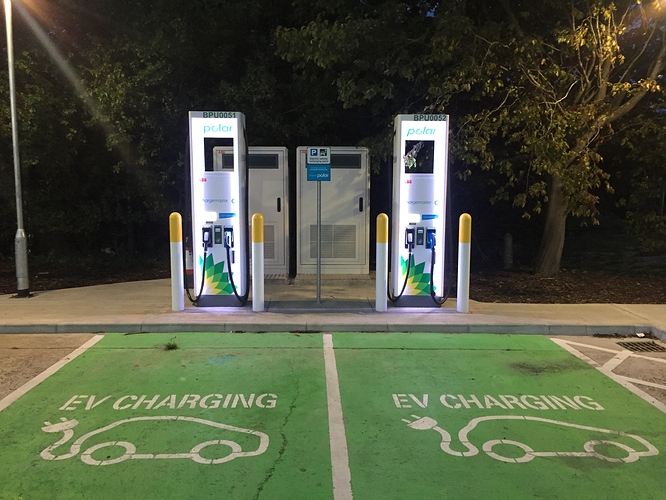 Thought I try a BP UHP charger in Harlow. Both of them not working! So definitely not Zoe’s fault…this time!

So many times charge points are down, I’m heading off to Scotland at the weekend and I’m so nervous not about running out of charge but actually finding a working charge point !

I tried one of these in Weymouth at the weekend, all was working well until I hit around 80% charge when it stopped and wouldn’t restart. I couldn’t get the connector out of the car for a few mins either. Zoe does seem fussy with CCS.

You’ll be fine. You have the added bonus of AC of up to 22kW to fall back on which is typically more reliable than CCS so you shouldn’t ever get stranded.

Once you get across the border, remember that your POLAR Card from Onto won’t be of much use. You’ll ideally need a Chargeplace Scotland membership card. Plenty of chargers all over the place but many locations only have one charger. Be sure to check on Zap Map and have a plan B in case the one you get to is busy or faulty.

Driving an EV in Scotland when armed with a CPS membership card is really easy and cheap, especially when you have the range of the ZE50 for example.

I’m driving through the Isle of Skye now (all the way from London!)- had the same worries before but found that the CYC app seems to work well (even though the app is very poorly designed) and Zap map has been useful in planning ahead to avoid chargers that are definitely out of service.

Once you get across the border, remember that your POLAR Card from Onto won’t be of much use

Lol if I had a Polar Card from ONTO that would be, the bonus being any charges ONTO will refund for me !!

Do Chargeplace Scotland have an app you can use rather than a card ??

The CYC App works on some of Scotland’s chargers, but a lot of them are offline only operation so will only work with a RFID Card. Especially when you get away from the big towns and cities and phone signal becomes more limited too.

If you were to apply for a card right now it would be unlikely to get to you on time too, if you were going up at the weekend. I would have offered to mail mine to you first class for you to borrow but it looks like I could be heading up in the next couple of days myself.

Where abouts in Scotland are you heading, if you don’t mind me asking? I might be able to give you a bit of advice for charging and tell you roughly how confident you should be feeling without a card.

I’m going to AYR have looked and there are quite a few around that seem to work with the app, also a couple of rapid ones as well, so all should be ok and I can do a top up charge at the services just before the border, fingers crossed they are working !!

This thread is supposed to be about charging fails, not your holidays!

Not been there myself, but you shouldn’t struggle with signal there. The CPS Rapid in Ayr appears to be broken so wouldn’t rely on that but there is an Instavolt a little furtner north which will take contactless credit cards and they should be working just fine as always. Plenty of 7kW and even a few 22kW around on Zap Map which seem fairly reliable too.

When heading up, Todhills Ecotricity is almost always on free vend and fairly reliable, but can sometimes get busy since there is only one charger. Failing that there is Gretna a little further up which has more Ecotricity and Ionity too so no risk of being stranded, but if you end up there you may have to double back on yourself to get back on the best route into Ayr by the looks of things.

As you said, the CYC App appears to be happy to connect to most of the chargers and posts in and around Ayr by the looks of it. You shou;dn’t have much too worry about.

It will be my first experience with an EV. Half of the Polar and CYC charge points in Brighton seem to be permanently offline (including the sole Rapid charge point in the city). And now it seems Zoe and/or Polar are a bit temperamental when it comes to charging.

I had planned to do the 450 mile drive up to see family in Scotland at some point but I’m really nervous now.