I’ve used the route planner in ZapMap and it suggests the route is 274 miles and I need 1 stop at Cribbs Causeway. 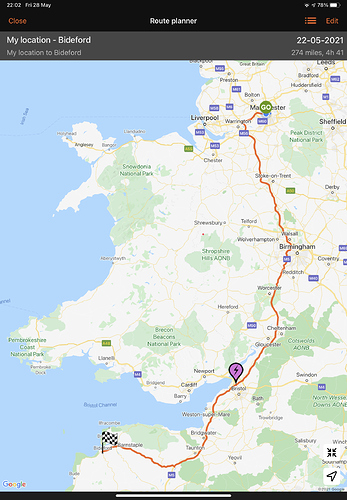 I’ve then used ABRP and it tells me to do two stops for the same journey (a quick stop near Wolverhampton and a long stop near Bristol).

I’ve already got range anxiety so think 2 stops might be better but it got me thinking should I be able to do it with one stop?

Also, which app do you trust the most based on experience?

Also, which app do you trust the most based on experience?

My vote would be… ABRP all the time.

I agree. My crude understanding of the two is:

I could be wrong!

My recent experience was that ABRP underestimated the car’s efficiency and had me charging much more often (and earlier than I wanted). I ended up pretty much ignoring it and running my own route which left me with more in the battery when I arrived with less charging time (over a ~220mi trip).

I put it down to me using the free ABRP which didn’t take into account proper traffic and/or roadwork zones which increased my range and meant instead of arriving at the first stop with 14%, we had 26%, then it wanted me to charge only 35mi later where in reality we could have made the whole next leg.

I don’t really ‘get’ it yet- it could be I haven’t clicked with it or maybe I’m not driving the app right, in any case I find it good for a guide but by no means rely on it personally.

@BillN will be the best person to counter everything I’ve said though!!

Did you just tell it what car you had and then put a route in?

The free version makes certain assumptions, for example 10% battery degradation, 90% charge when you set off, and no weather data. When correctly configured its surprisingly accurate.

Yeah, if you just you use it with the default reference consumption and the default advanced settings then it will almost always significantly over estimate consumption.

Then, I just set degradation to 0 (the i3 has very low degradation generally, and the Kona and e208 I’ve had are brand new).

Finally, advanced weather and traffic speed settings are very important really and actual consumption could be wildly different from the predicted figure if for example there was a 10mph tailwind.

Before the premium version became available I used to use windy.com to get an idea of likely wind speed and direction and then enter something appropriate into ABRP. Temperature and precipitation settings need to be checked each time too.

And the traffic reference speed setting is (I strongly suspect) much more relevant if not using the premium version. If you have your max speed set at something like 72 but you are travelling in rush hour on a busy motorway, then you probably need to set the reference speed setting to something well below 100% as otherwise it will be assuming you are driving 72 for mile after mile when in fact you might only be doing 60ish. On the other hand, if you had max set at 72 and you’re on an empty motorway and actually doing 72 (gps speed) then the reference needs to be set to at least 103% to allow for the 2mph increase over the 70mph limit.

Then, when actually on the move and driving, I have my phone mounted (used a Brodit mount with magnetic plate attachement for the i3) and occasionally just check the predicted SoC against the actual SoC and adjust up or down in ABRP to match - then the consumption model for the rest of the trip will be adjusted accordingly and your arrival SoC will near enough exactly match the updated prediction.

In a car like the e208 with Tronity and ABRP premium this is all very easy because all of that is done for you - you literally just have to enter the destination.

Wattsup is a great app - https://www.wattsup.app

It is, but it serves quite a different purpose to my mind as it doesn’t (and it’s not trying to) give you any advice about when/where you should charge.

As mentioned earlier, ZapMap route planner is also not really much like ABRP at all as it just is nothing like as sophisticated.

When I was driving back from Scotland a few weeks back in torrential rain and with 20mph headwinds, the only route planner I would have / did trust to accurately advise me when I would need to charge was ABRP.

There is another app which is similar - but it’s currently way behind in what it offers: ‎EV Navigation is a turn-by-turn navigation and route planner system, created for electric car users all around the world. EV Navigation does not only provide users with a reliable navigation system, including charging stations, but it is also...

Cheers, all this makes sense.

I’d fiddled with a few things but myself and also wanted to make sure it was conservative. On the motorway I try to 70mph indicated as a top speed (prob 68 actual) just for efficiency as anything higher drains the battery quickly.

I did adjust both the start and end (goal) battery % so we arrived with more than 10% and added load for second passenger and all the stuff we brought with us but hadn’t fiddled with wind, degradation etc — probably roadworks is what gave us some more efficiency if the model assumed full speed the whole way.

In any case I find it helpful as a guide but by no means gospel - I think I researched this trip in terms of chargers every few days since we planned it looking on zap map at chargers and google for routes etc countless times, certainly if we were travelling somewhere at a whim and hadn’t researched it I’d use and trust ABRP more

I’ve not really used abrp much before but I’ve tried to plan a route today. I know for sure there is a rapid BP pulse ccs charger at one of my waypoints but for some reason it’s not showing up. Also several chargers local to me (Instavolt and Podpoint) are are missing too. Not sure why it’s happening as it wouldn’t make sense for chargers to be missing if they’re pulled from other services.

Only a few networks provide direct database access to ABRP as I understand it. Most chargers come via third party aggregators, most of which are maintained by EV drivers.

So if you spot a charger that isn’t appearing you can go ahead and add it if you’d like to help it improve, and/or get in touch with networks to pester them to open up to ABRP.

One of the most important things for the accuracy of our plans is the knowledge of Charging Stations. To help with this knowledge, there are several ways you can help us out: Contributing to Our Charge Database Partners Most of our charger knowledge...

I guess I could contact them with details of missing chargers that I know. However, the idea is that it tells me where they are, not the other way around. If at a quick glance, I know of 4 chargers missing myself, who knows how many are missing along my route.

I love the idea of abrp but this sort of thing, albeit no direct fault of its own, lets it down as a service. I’ll probably end up just researching the route on zapmap myself and deciding on my own charging stops. The zapmap route planner doesn’t seem to function with much ease either, so I don’t feel like there another option.

I’ll probably end up just researching the route on zapmap myself and deciding on my own charging stops.

This is what I tend to do, and usually enjoy the planning more than the journey itself

I’ve also downloaded wattsup today as suggested above by @Jparwyn71

I actually really like the simplicity and being able to see the icons and distance to stations on route. I’ll give that a try while driving over the next few days

IME, Wattsup does best at adding (rapid) chargers most quickly after they come online. ZapMap doesn’t seem to be as good as it once was for some reason.

Of course, ABRP covers the entire planet - so I suspect it’d be almost impossible for they themselves to add chargers, and the problem is only going to increase as more chargers are being added more quickly every day. They really need to secure direct database connections with at least the main networks in all major EV countries. I guess that’s why they asked for help from the EV community to email network operators and request that happens.

I don’t really see ABRP as a charger discovery tool at all - I still use ZapMap and PlugShare to check the likely reliability / latest know status of any charger anyway.

For me, ABRP is mainly about just monitoring what SoC I should expect to have at the next destination / charger. If there’s a new charger that shows up in WattsUp or wherever (but not ABRP) that I want to use I’ll just add the location as a waypoint with charging.

If I had a frequently travelled route where I knew there were some chargers that ABRP didn’t know about, I’d take 5 minutes to quickly add them to the OCM so that a) the next time I use ABRP it will know about those chargers, and b) the rest of ABRP using EV community is helped out also.

ZapMap doesn’t seem to be as good as it once was for some reason.

They seem to be totally ignoring user submissions these days. Last year I added locations and they would show up within a few days. But recently I have been adding several and even the ones I reported 2 months ago are still not showing.

The only time I see new locations on the map it says in the details that the information was supplied by either the charging network, or Zap Map themselves. Never a user contribution anymore.

I’ve never added a new location, but Zapmap did make a change to one I reported for being in the wrong place a couple of months ago. Only took them a couple of days as well.

The Allego chargers across the London Borough of Newham which have been working for 9 months or more appear on Plug Share and the Shell App, but not Zap Map.

Perhaps they’ve been increasingly focusing what limited resources they have on creating stuff like ZapPay to generate some revenue (although I can’t see that ever being much of a success).

In an ideal world I’d rather see ABRP (or something like it) become a one-stop-shop (and ultimately fully useable via in-car systems - whether via CarPlay etc or otherwise - and with direct connection to cars - like the Polestar 2 now has).

If services like ZapMap/PlugShare etc were just rolled into a service like ABRP which in turn was then fully connectable to cars, then you could just say get me where I want to go and only use chargers which meet my preferred criteria, are working, have more than x units, cost less than y, take contactless payment, have toilets etc etc

At the moment it seems there are several apps that do something but not everything well. I know there’s that old saying “Jack of all trades, master of none” but it would be fantastic for a few of these apps to strike a deal to become THE app for EV drivers.