Which part of the country is everyone from?

I am in South West Scotland right beside the border and have yet to see many EV’s here. I was driving with the kids to the supermarket yesterday and we saw a Tesla model 3 coming in the opposite direction. The kids were totally excited to spot one and I think I may have brainwashed them of late with all the research and YouTube videos in prep for getting our Zoe

We have seen a few different ev’s when charging as I have ionity chargers at the local motorway services about 2 miles from my home.

The fact that we don’t see many just got me to wondering which part of the country everyone else was from and how common EV’S are where you are?

I’m from the Midlands. Leaf,Tesla and I-Pace are the most common to spot around here. You can pretty much guarantee to see about 10 of each on a given day. I’ve still only ever seen a single ID.3 and two ID.4s.

how common EV’S are where you are?

…as muck! Usually see a few even on short local journeys. Six in the couple of roads around me, including another ONTO supplied vehicle. (East London)

I am located Essex/London border. Tesla predominates in my area. Never seen another Zoe yet. Never spotted another ONTO either but keeping a lookout for anything yellow @E7EV

I was thinking of you yesterday as I went to see the bluebells in Norsey Wood, Billericay. Looked at some chargers on Zap-Map and read some of your comments in the chat! Tell me, how do you get the Hog and Apple Pastry? I was refused at Shell Recharge Rise Park

London, but regularly drive up to the midlands and elsewhere. See at least a couple of Teslas on most journeys now I reckon.

Lots of ID cars about already too.

Plenty of i3s in central London.

eNiros occasionally - but I think they just sort of blend into the background. Quite a few eNiro Ubers in London.

Konas have become a lot more common in recent months.

See quite a few 208s and Corsas now but it’s almost impossible to tell if they are EVs when they are driving towards you.

Have seen one single Honda e and one Mini.

Ioniqs seem quite rare too - most are hybrids.

A couple of MG ZS, not many l though, and no MG5s - but again I could have been surrounded by them and not noticed!

Not a single ‘Mustang’ yet

I’m near Newcastle. EVs are everywhere here, especially the LEAF since its manufactured nearby and everyone either gets family and friends discount (EVERYONE seems to know someone who works at Nissan) or they simply want to support local business.

Onto vehicles are also very common. Most times that I visit the Fastned charging hubs there’s at least one other also there, as well as loads of their Zoes that I see parked up around the city.

More recently I’ve seen an explosion in popularity of Tesla Model 3 and Porsche Taycan. Usually making the mistake of plugging into the AC side of a rapid charger and then walking off for hours, annoyingly.

Northwest, Bolton. Don’t really see that many full EV’s around here, mostly taxi drivers in hybrids. But the ambulance service around here uses BMW i3 so see plenty of them !

Interesting to see both how far spread ONTO customers are and also how EV ownership differs from place to place.
I am also quite surprised how good the public charging is in and around my area with EV’s not particularly popular here yet. Good for me though and ultimately what made my mind up for me to take the leap as I don’t have off street parking at home.

It’s a good idea for a topic.

I’ll try and remember to make a mental note of which EVs I see today and how many, although I only have a relatively short journey to make today. It’ll be interesting to see

Some day we’ll be pointing out the odd ICE car we see driving around.

I do this with my kids. When I was young we used to play ‘count the red cars’, now my kids are playing ‘spot the EV’

I’m in Surrey, plenty of TVs round here, Taycans, Teslas, i3s, kids are bored now of looking for EVs as they’re so common!

Perhaps it would be good for everyone to write in their Profile where they are from, and what vehicle they currently have. This would help to add some context to their posts by simply tapping on their profile picture. It’s a job keeping up with some, as they swap their cars so often. You can also add your referral code as well. 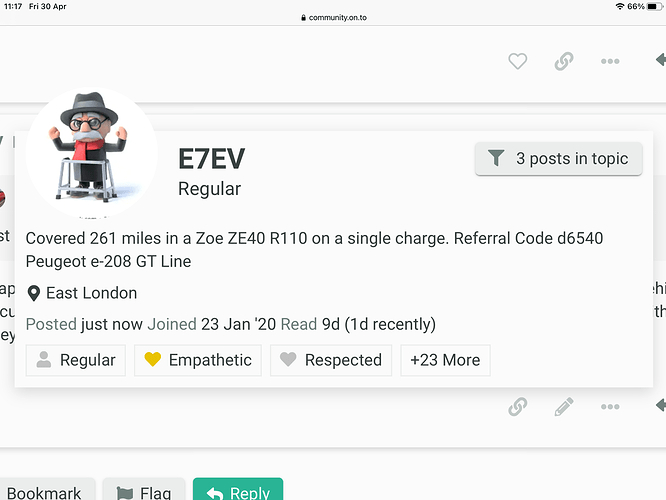 I’m in a small town West of Aberdeen and there are at least a couple of dozen EV’s here. Mostly Teslas and Zoes but a few Leafs as well.

I must be honest and didn’t actually redeem my voucher either. The Shell in Upminster just said they don’t do hot food and as I couldn’t find it on sale either I gave up. Not been to any other Shell yet to tey but will give rise park a miss also thanks for telling me. We need to start a campaign “Give us our reward Shell”

North east.
Got a Zoe GT due on Wednesday. Wanted a Kona but nothing available ‘up-north’.
John Snow knew nothing and I don’t either…

South East (Berkshire/Hampshire Border) for me. EVs relatively common, thankfully my local Osprey still seems to have good availability when I need it so EVs not so common as to inconvenience me!