Weirdest thing to happen to you while charging?

Not massively “out there”, but a couple of kids cycled up to the charge point next to the one I was using last night. Just interested in seeing what was going on, I thought.

One of the two pushed his bike over to me and motioned me to open my window, expecting some questioning from him and the only thing he asks is “have you got any change for me?”

I’ve had a couple of girls come up to me asking if the rapid charger had USB to charge one of their phones that was dead. Luckily for them I happened to have a spare power bank on me which I just gave them to fix their problem. It did give me an interesting thought of what would happen if I tried to send 50kW of power through my iPhone though!

Lots of curious people coming up to look at the chargers, read the instructions etc. but a surprising amount of people get attracted to the big red button, even while I’m sitting in my car, charging on that very charger, watching what they’re doing. I now leave the car switched on while charging at busier places just so I can quickly tap the horn when I see their hands wandering towards the emergency stop button.

Wow, that’s mad. When you say people, what kind of age group are we talking?

what kind of age group are we talking?

Bit of everyone really, but I would probably say it’s mostly older men that tend to find the stop button too much to resist. Especially at motorway services. That is always where it seems to be an issue.

I’ve not had people press the button, but I’ve had several older gentleman look at the screen while my car is charging. Not in a “how long are they going to be?” Kind of way. I mean people who don’t have an electric car but stop as they walk past to look at the chargers. It’s not a bad thing in a way if these people ever switch to electric they’re at least a bit more familiar with the chargers.

In regards to the strangest things to happen to me:

Otherwise my experiences are mostly helping people who are struggling to charge especially at Cobham Services as people always trip up when they try and use contactless cards at the Ionity chargers.

Also recently had an old couple just pick up a Nissan Leaf (28kWh) arrive at M2 services and the Gridserve chargers weren’t working. They had another 60 miles to go to get home and had 30% battery left. I told them their best option was to drop down to the M20 and go to the services there. Hopefully they made it and it didn’t put them off

It’s not a bad thing in a way if these people ever switch to electric they’re at least a bit more familiar with the chargers.

I mostly get out of the car and engage with these people. They either move on quickly, and so do no harm, or are happy to have a quick chat. An opportunity to promote EVs and, of course, ONTO.

My most bizarre experience was the following. I was just picking the car up from a 7kW charger at the end of a residential street, after having left it there for a couple of hours. A vehicle pulled up in front of me. The driver got out, and without a care in the world proceeded to urinate up the side of his rear tyre. Not sure if he knew I was there, or even cared!

I had this young dude roll up in his e 208 telling me I should not be charging here, asked why, response was your car is not a EV

Asked him how he worked that out?
Reply was your car does not have the green stripe on the number plate

To be fair I nearly did this when a stupidly large Range Rover pulled up beside me. I wanted to say something thinking it was an ICE but then they plugged in. It was at that moment I learnt that Range Rovers are available as plug-ins

I’ll be honest @E7EV , I thought you was about to say “he urinated up the side of the charger”.

That is very bizarre. I cannot think of any logical explanation for that. I mean if he got out and ran to the side of the road into a bush, fair enough. But to stop randomly to urinate against your car?

Brings a new meaning to splash and dash, though…

I’m confused. Since when did peeing against tyres become a thing? And why?

It’s been a thing for decades, laziness mostly I guess. Not exactly the same context, though a lot of lorry drivers I’ve known over the years have had to resort to it for lack of toilets on their run at times.

In the UK, IIRC, the legality is that you can do this - I think on the near side…

, but not exclusively) have different behaviours which they believe normal…

This is news to me. What a weird world we live in lol

randomly to urinate against your car?

No fortunately it was against his car!

In the UK, IIRC, the legality is that you can do this - I think on the near side…

It used to be that Hackney drivers could do this on near side back tyre, but that law was repealed and is now just a myth.
Google it 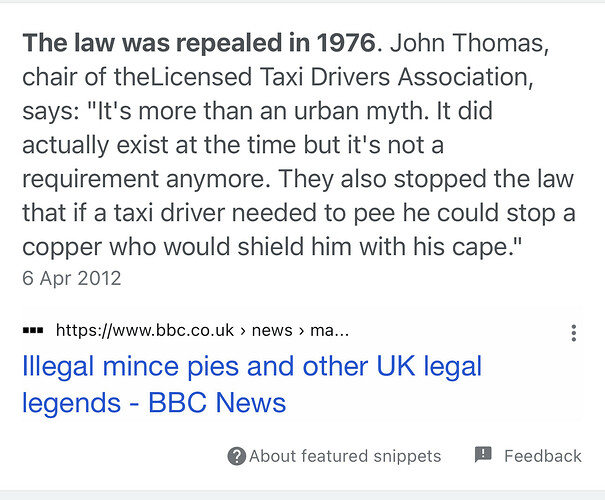 In my defence, Your Lordships, I predate that 1976 repeal of the law by enough of a margin that I would cite it as mitigating circumstances for my actions. The case for the defence rests.

The Law Commission has proposed the abolition of 800 antiquated laws, but there is a wealth of mythology about what is and isn't illegal.