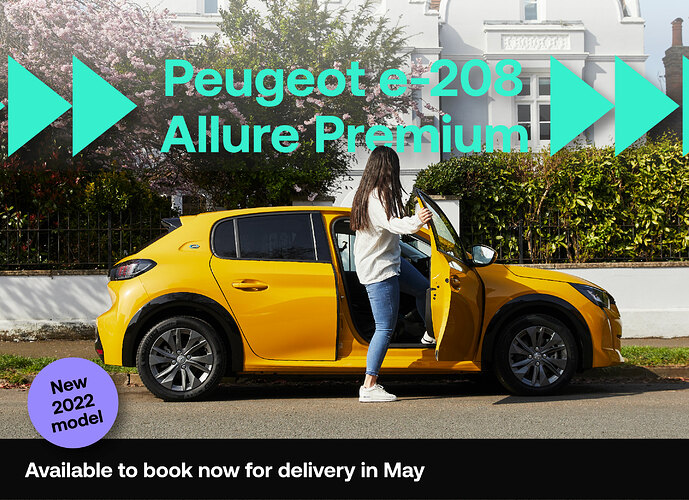 Fancy driving a brand new ‘22’ reg plate? The Peugeot e-208 Allure Premium is the latest EV to join our fleet and they’re brand new for 2022!

The e-208 is one of the most popular cars in our fleet, and we expect this latest model to be no exception! This sporty hatchback has the characteristics of a real all-rounder, with plenty of performance combined with a comfortable and stylish interior. Not to mention its impressive range!

The style on the inside is matched by the e-208’s bold exterior. With its array of vibrant colourways and striking looks, it really does stand out in the car park. The ‘Faro Yellow’ is our current favourite but there’s a whole palette to choose from. The e-208 Allure Premium is available to book now for delivery in May!

As always we love to hear your thoughts. If you’ve already driven the e-208, let us know all about your experience with it below for those considering making the switch.

For more information and to book now, check it out here:

ONTO’s all-inclusive subscription is the perfect alternative to leasing the Peugeot e-208 Allure Premium. Read our favourite features to learn more about this sporty hatchback!

For anyone who is interested in what’s different between this Allure Premium model and the GT Onto already have in the fleet, there’s this PDF from Peugeot: https://indd.adobe.com/view/fe340410-0500-4b0c-92a8-66dcf3af29d6

I’m a little confused (aside from the updated model year) why this less highly specced model is now a full £50/month over the price of the GT, yet has less in terms of spec?

Oh, and the countdown starts until someone has a go at the quoted “real world range”

Have you lost the pricing PLOT with this one ONTO. The nicer GT car is a lot cheaper and better spec .

Not surprising at all as all manufacturers are being bombarded with higher costs for everything, so this is just reflecting what we will continue to see throughout this year and next.

It’s sad because there will be a slowing of EV adoption due to the higher prices.

I wouldn’t mind paying that if it was the 2022 GT Premium. I’ve got the 70 reg GT, looks like I’ll be forced to swap to this model if the GT is phased out.

Looks like the 2022 Zoes set the precedent. New model year, increase in subscription. It has created a few anomalies in the pricing structure though.

I think we will see a general £100 to £150 rise across the low and mid band cars throughout this year, all cost driven. As has been stated a lot recently cost of living has rocketed and mad as a hatter Putin has escalated that .

Should the entry level e-Up be a loss leader to encourage EV adoption? Once “hooked”, many could decide to move up to a more premium vehicle. I fear once there is no longer a sub £400 option, ONTO will only attract the relatively wealthy. Look at the exodus we’ve seen of many longtermers even before the August price rise.

The problem I see here is. It’s the ALLURE over the GT for £100 price increase , compared to the old protected protected price , the £519 was bad enough , but I would still pick the older 2021 model of a GT than PSU an extra £50 for the allure equivalent

When you compare it to the corsa which is at a better spec, there pricing doesn’t make sense and is all over the place .

When you compare it to the corsa which is at a better spec, there pricing doesn’t make sense and is all over the place .

Unfortunately car pricing in general doesn’t make sense at the moment. Prices of new cars are on the rise again. Depending on when these deals were negotiated, how many cars were ordered and how generous the manufacturer was you can get some wild variation in prices.

I Suspect the GT Trim deal that Onto had has now ended, so they renegotiated to order more. The pricing ended up being too high so they were talked down to a lower trim level, but at a higher price point.

It’s speculation, but I have a feeling that we’ll see the GT Disappear from the website for new bookings soon enough, just like the GT Line did. As they are swapped, returned or withdrawn for R&R they’ll be sold on early while used prices are so strong.

But it wouldn’t be wise to compare models or even trims at the moment due to the insane prices and shortages. Look at each car as a totally separate deal and decide if any of them are a good deal for your needs. Or if you’re not picky then simply go for whatever you can get for the cheapest price.

Hopefully things will improve over time and we will see some more attractive pricing across models again, but at this point who really knows what’s to come.

As much as the crazy fuel prices are driving some to evaluate an EV as a replacement it’s going to stall simply because everything is just too expensive. This year should have been an explosion of uptake, but I can see it flatlining or at best stuttering.
Even if the war ends in a week or two (wishful thinking) prices are unlikely to come down for a year or more to pre-pandemic/war numbers.

Onto prices attributed to any model will be all over the place due to the dynamics of what they are dealing with, so it’s unlikely to ever be a fluid transition from lowly spec/price upwards…

Cost of living is going to drive many decisions for the bulk of the U.K. population.

That’ll be the wonderful ‘standards’ that are used of course.
Take them with a pinch of salt and EV-database at least provide some more useful stats… 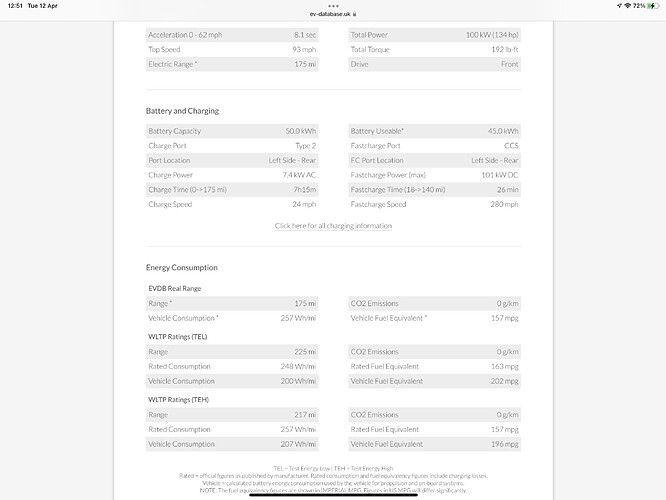 But there is always an excuse for rising prices, it makes a change from blaming Brexit.

And that’s down hill with a wind behind you