Had my first onto car delivered on Friday, a Hyundai Kona, happy with it so far but I am a little confused with my Shell card. Firstly I used it to charge at a Gronn Kontakt charger which doesn’t appear on the Shell app (although I am sure it used to be on there) with no issues at all. Then today I tried using an Osprey charger that appears on the app and it came up with a message saying “authorization failed” and didn’t work in the app with the card linked either. I gave up and ended up popping back to the Gronn Kontakt that I know works.

Others have had similar issues with some Osprey chargers. The Shell Card should be accepted by them. We’ve not yet got to the bottom of whether it’s an issue with the Shell Card or the charger. Best to ring Osprey CS while there. They have been known to remotely start a charge for you. Something @Koda always advises is to make sure you use the RFID reader and not the bank card contactless one by mistake.

I’ll try ringing them next time I am there as it is a faster charger than the Gronn Kontakt one.

If you want to give us the location of the Osprey Charger another subscriber who has also tried it may be able to add further comments.

Its at the Chalkhill Blue Andover, Hants, I have just noticed that Shell have extended Surrey to encompass Andover 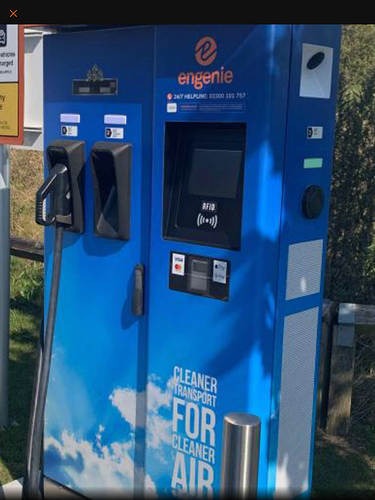 I successfully use a similar Osprey Charger at Stratford International Station using the Shell Card with no issues at all. You definitely used the RFID reader just below the screen? Did you try both Osprey devices and get the same results?

There’s a Shell Recharge charger not too far away but appears not to be working at the moment. They seem to be renovating the Shell Service Station. Hopefully this will soon be finished and you will be able to access this one. Apparently the single 50kW charger is being replaced by two new ones, hopefully 150kW.

Edit: Just had a look at the plans and appears to be two HPCs. I pass by here on the way to Cornwall so this will definitely be a good place for me to stop when it’s re-opened.

Yes, the shell garage is in the process of being demolished and rebuilt into a Shell / Little Waitrose. I am hoping that it will be done fairly soon.

@E7EV This is a good call - I constantly sit there trying to use the Shell card on the bank card reader at my local osprey charger - even though I KNOW the RFID reader is separate. Apparently I have a blind spot remembering this!!

I’m having the same problem on a charger I have used loads, currently waiting for a replacement card to arrive.

It’s so frustrating I tried again tonight, including a phone call to Osprey to try and resolve the problem which ended in failure. They said the card was showing as declined on their system and suggested I contact Shell. Shell had shut up shop for the day so went to the Gronn Kontakt charger down the road instead which is now coincidentally showing back on the Shell app and that worked first time.

I reported that Osprey charger didn’t accept the card via the button on the Shell app so it will be interesting to see if they actually do anything about it.

I reported that Osprey charger didn’t accept the card via the button on the Shell app so it will be interesting to see if they actually do anything about it.

I Wouldn’t count on that happening. You will learn over time that the charging companies generally don’t really care about sorting out such isssues. As long as they can see that someone else has tapped a credit card recently and paid so they can still see the money rolling in, anything else isn’t really a priority to them.

Even if they did though, I think this is something that Onto need to speak to Shell about. It’s their account, and there are a few people now who are reporting issues with that account when it comes to Osprey chargers. There has to be a reason for these declines.

PS Does your Gronn Kontakt chargepoint work with the Shell card or do you have to use the app? I have tried to tap the card on a few of my local ones and they don’t seem to respond to RFID cards at all. As you say though, they have just appeared in the app which mine weren’t showing before, so it may be worth me trying again sometime now.

I kind of suspect that the report a fault button on the Shell app goes into a black hole especially as you don’t get any indication that they are going to do anything.

I have tried the Shell card and app on the Osprey charger with no luck.

The Gronn Kontakt chargers worked first time with the card on the RFID. It’s funny they were showing before I got the car, then disappeared for a week and as of yesterday are back again.

Give them a call on Tuesday during office hours. Prees the button for new customers and it will put you through to the right people who should be able to get a card out to you in the mail.