I didn’t have to sign anything, but the deliverer took a photo of my driving license twice, once for the 208 and then a second time for Zoe.

I also didn’t have a locking wheel nut but the driver told me ONTO are not sending them anymore as they were being lost so are being kept safe by ONTO ???

Still not the “Contact Free” service OnTo stipulates, I had an issue with the driver of the ZE50 wanting a picture of my driving licence (GDPR), so he took a photo of me!

So, you have a blow out / puncture etc and the tyre won’t inflate with the snake oil in place of the spare wheel, then you are well and truly stuffed until they mail the locking wheelnut to the garage (we know how efficient their mailing of keys out to service centres are)!

Seriously bad move! You can charge a customer for a replacement locking wheel nut, you can’t teleport a key to an RAC patrol in a live lane of a “Smart motorway”!

I feel like there had to be some tradeoff for giving us keys this time. We’ll give you the key… but we’re taking the locking nut!

The key is not essential, the locking wheel nut IS essential if there’s a puncture/tyre failure etc.

You could end up waiting weeks (literally in ONTO’s case) for the key to arrive for a replacement tyre!

Still not the “Contact Free” service OnTo stipulates, I had an issue with the driver of the ZE50 wanting a picture of my driving licence (GDPR), so he took a photo of me!

Onto privacy policy includes a mention of keeping a copy of driving license and as the legal basis for processing personal data is your contract with them, what’s your point with referencing GDPR? None of the article 21 sub-articles seems to be relevant.

1The data subject shall have the right to object, on grounds relating to his or her particular situation, at any time to processing of personal data concerning him or her which is based on point (e) or (f) of Article 6(1), including profiling based...

The driving licence check is part of the application process, I have no problem with that.

But some random people from GEFCO taking a photo of my licence during a “Contact free” delivery is a bit concerning to me!

I thought the handovers were supposed to be contactless. The means, presumably, they shouldn’t require signatures.

Mine worked so that I received a SMS with a contactless delivery code that I gave to the delivery driver.

That didn’t apply to me, I had the code, but the driver still insisted on my wife signing for the keys

When I had the ZE50 delivered, they insisted on a photo of my DL, or of me with the car

Both times, they refused to accept the “code”

The driving licence check is part of the application process, I have no problem with that.

But some random people from GEFCO taking a photo of my licence during a “Contact free” delivery is a bit concerning to me!

Unless GEFCO is acting as a data processor for Onto as the data controller, they probably have a problem on their hands as they would have needed to fill their article 13 duty to inform you on the spot.

Of course they aren’t, all the vetting and procedures have been completed prior to delivery.

The GEFCO employee/contractor was asking in lieu of ONTO’s systems working properly, but the delivery was supposed to be “Contact free” on both occasions, I shouldn’t have even needed to be there!

My 3-pin charger arrived… except… it’s not… 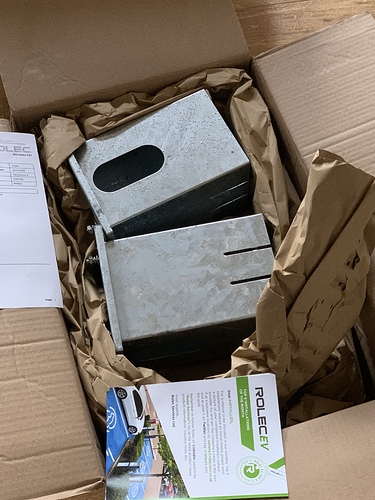 For once, I wouldn’t be blaming Onto for that one.

Rolec are hopeless, both with their service, and the quality of their products. I suspect it’s more likely that they are behind this mix up.

The dispatch note to the left, what does it say they sent you? Correct name/address and item on there?

What on earth is that

As I understand it, being unsolicited, you have no responsibility to return it to them. If they want it back, they need to make arrangements to pick it up, at your convenience.

The dispatch note to the left, what does it say they sent you? Correct name/address and item on there?

Indeed. It was not intended for me. I’m sure Rolec is to blame. But it’s another example of when Onto relies on a host of suppliers and outsourced service providers how the customer is left chasing around to piece things together. I believe the system can work. But at the moment it doesn’t.

Hi @sdmr! Sorry to see that! We’re looking into it with the supplier and we’ll be in touch with you

Thank you for the call today ONTO, credit where its due. I was told pretty much what I already know, the service failures were mostly outside companies rather than ONTO themselves.

I suggested drivers are either regulars, or given an information sheet and told about CCS charging over 10 times faster than type 2.

The car should’ve had a locking wheel nut key, but I’m not the first to have this problem, I was told they are definitely not ‘keeping them safe’ as they are needed urgently if a tyre bursts/fails/punctures etc.

The driver should have charged the car up, I’m guessing because he spent 2 hours on a type 2 charger, he wasn’t keen on charging up.

When I called ONTO, the “at least it wasn’t down the street” comment regarding the 2nd key, OBVIOUSLY, isn’t the official view of ONTO and the call is going to be reviewed.

The delivery should still be contact free, the key should have been posted through the door instead of insisting on a signature.

Finally, regarding the advisor at Onto saying that I couldn’t be authorised to charge up at a non polar unit, that was wrong and I should’ve been allowed to, had I paid at my own expense (which I would’ve done if the polar unit was occupied), they would’ve reimbursed me as the vehicle was delivered with much lower power than it should’ve been delivered with.

To apologise for the numerous problems with the delivery, ONTO agreed to credit the delivery fee, which I was happy with.

As I said, credit where it’s due! They genuinely seemed interested in my concerns and seem to be trying to prevent repeats of these issues.

I suppose the title should be changed to “ONTO’s Suppliers providing very poor service” as ONTO seem to genuinely be interested in improving and preventing repeat occurrences.