Rapid charge not working on DS3

I have had a DS3 for 2 weeks and have had a terrible experience. The car itself is nice but with no rapid charging its been a real pain to use practically.

Firstly the car was sent with a European plug for domestic charging. After several emails to Onto with still no charger, I took to to a nearby town (the nearest rapid charger to me) for a top up while i got some shopping. Neither machine worked on the DS3 but another customer was able to use it. Also the slower 11kw charger did work. So I waited an hour to get enough battery home, also waited half an hour to get through to onto to report the issue. I then had to drive the car to a multistpry to charge overnigh on the slow charger (2 mile walk each way).

UK charger was then sent out finally…but I still have the rapid charger issue.

RAC came out as a home visit. The guy thought he was coming to a flat battery and even did an ‘engine’
ODBC fault check *facepalm. Needless to say he then left. Since then I have not heard a single thing from Onto, that was over a week ago. I have emailed several times. Individually everyone is nice and friendly, but there is a serious issue where no one is actually able to resolve the issue for me. So I still have a car that does not rapid charge, which is what I wanted.

EDIT: While i’ve only had this car 2 weeks ive been with Onto/Evezy for 18 months, I had BMW i3 previously so I would say pretty experienced with ‘fully electric life’ (and its foibles) in general.

Did you try another rapid charger? If possible I would try one on a different network to rule out any charger issues. If it still doesn’t work give on.to a call and they will book you in for a diagnostic and repair.

Yes, I tried 2 and one of them was used by another customer while I was still there. I have spoken to Onto several times (6 different people at the last count) and no update as to when this repair might happen unfortunately.

That’s very disappointing. I’ll mark @Lily_at_Onto here for you as well. Hopefully she can help you out and get someone to sort this for you asap!

Unfortunately the fact that another customer was able to charge on a rapid does not mean it’s the DS which is faulty. It could be an issue with the charger compatibility.

What make/brand of chargers did you try. Did you just try Polar ones as they are included in subscription?

Probably useful if you state the actual chargers you tried as maybe others on here have had issues with them, albeit with other brands of car.

Thanks yes of course I gave all the details of the chargers I tried to Onto when I called them on the day, I also called the provider and checked both chargers, the car is supposed to be compatible with the CCS charger as far as I know. Someone needs to look at it, thats the whole point. I cant do any more tests that I have already unfortunately.

Just because the charger has CCS and your car has a CCS port doesn’t mean they are compatible. Some cars have software compatibility issues with certain chargers.

If you are willing to share the locations with us, or at least check for yourself on Zap Map and Plugshare comments it would help us to advise you further. It still isn’t 100% certain your car is at fault. I’d say try other, totally different chargers and see what happens. And then if still no luck get back to ONTO if its still not working and demand either a fix now, or a replacement vehicle.

Sure the provider is Osprey: 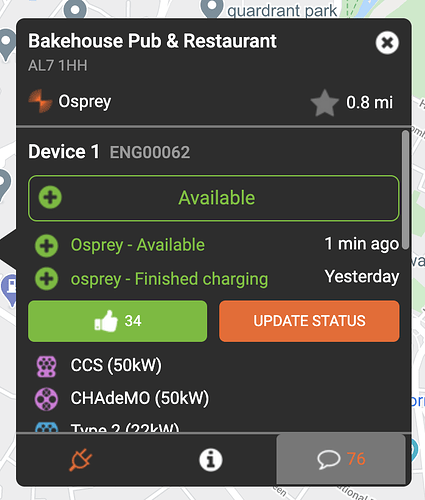 And then if still no luck get back to ONTO if its still not working and demand either a fix now, or a replacement vehicle.

Now this is where I have got to, but no luck yet…

I also want to reiterate I used the Type 2 charger from this very machine just to get home.

Type 2 communicates with the car by a different standard and charges the car in a different way. One working doesn’t guarantee the other.

I can see the chargers at this location are made by Circontrol. There is a charger made by EVBox, on the Geniepoint network at the Morrisons nearby. Quite reliable by recent comments and in my experience will charge more or less any car you connect to it.

Looking in the same area, the nearest Polar charger to there seems to be at a hotel in Hatfield, and is no longer accessible, and that general area doesn’t seem so well covered by them so I guess these attempts are all going to be at your own expense I am afraid.

See if you can get a charge with a different manufacturer’s rapid charger. Depending on where you are in relation to that charger and which direction you are likely to travel in the next few days, if that Geniepoint isn’t of interest to you, look out on Zap Map for ones operated by Instavolt and Electric Blue. They are two other networks I would consider to be reliable and worth trying on. They also have a limited presence in that general area.

Thanks yes I will try the Morrison’s one at some point, I am actually in SG12 Ware, so its not exactly next door, but they are the nearest ones to me. Having said that no one at Onto has told me that the Osprey ones aren’t compatible in any way with a DS3 (not sure why they should be, thats the whole point of a standard).

Of course, but it was to point out its less likely something wrong with the unit itself or the software compatibility. The very point of a standard is that it should be useable, indeed the customer after me in their Prius managed just fine. I had the BMW i3 for a year and a half before this and NEVER experience this issue on many different vendors (unless the charger itself was not working of course).

I have the DS3 aswell and have no issue at all with the rapid chargers from polar,i use the ccs fast charger and works fine ,so may be an issue with osprey ? 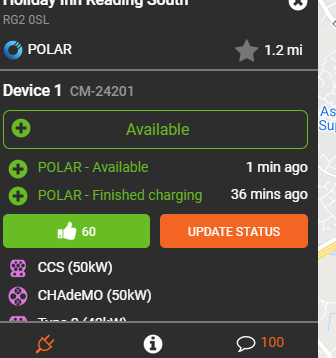 Of course, but it was to point out its less likely something wrong with the unit itself or the software compatibility. The very point of a standard is that it should be useable, indeed the customer after me in their Prius managed just fine. I had the BMW i3 for a year and a half before this and NEVER experience this issue on many different vendors (unless the charger itself was not working of course).

Unfortunately non of this ‘standard’ stuff really means 100% compatibility across manufs, both auto and charger infrasctructure. There are constant issues and most recently VW have been shown not to adhere to standards on the ID.3

Having a successful charge from a Type 2 AC charger is not in any way the same as a successful charge from a CCS DC charger. You need to compare apples with apples. Unfortunately the only route for you is to prove it works on other CCS chargers or not, to help resolve if its the car or chargers. ONTO and guess what the manufs also, will be hard pushed to prove what is the issue also. Nearly all dealers will only have AC charging on site, so cannot even check the CCS side of things.

Of course, but it was to point out its less likely something wrong with the unit itself or the software compatibility. The very point of a standard is that it should be useable, indeed the customer after me in their Prius managed just fine.

Given the widespread issues with CCS 1.0 and the better reliability of CHAdeMO there’s good reason to believe the car companies involved with CCS didn’t put their best effort into it.

Looks like a trip to Morissons is in order…

This is encouraging, i’ll try a different vendor for comparison, thanks for sharing.

The BMW i3 is one of the better cars when it comes to rapid charging. You can plug it in and it will almost always start charging without complaint, and charge at full speed all the way to quite a high SOC. Even the i3 did originally have software incompatibility with DBT Rapid chargers in the early days but this has since been fixed.

Not all cars (especially ones that have only recently went on sale) are as capable nor compatible as the likes of the i3, even if they all should be on paper since like you said they all follow the same CCS ‘Standard’.

I get why everyone wanted to switch to CCS, but honestly Chademo was so much better than this!

So what has been your charging routine since joining ONTO ? Using the 3 pin charger at home and then Rapids when you travel further afield ?

Pretty much exactly that, but its off an extension lead and not ideal really. As I don’t do many miles I wanted to use the rapid charger once a week while shopping. ATM, that would be more than enough for me.

Short update, so last week the car was due to be swapped. I got a call on the morning apologising that it wont happen because, you guessed it, they couldn’t charge the car. Next effort is today where they are replacing with the higher spec model, fingers crossed that’s ok.

For completeness On.to have also refunded 2 days worth of rental for the inconvenience so far.