Onto Tips is back with Charging Etiquette! 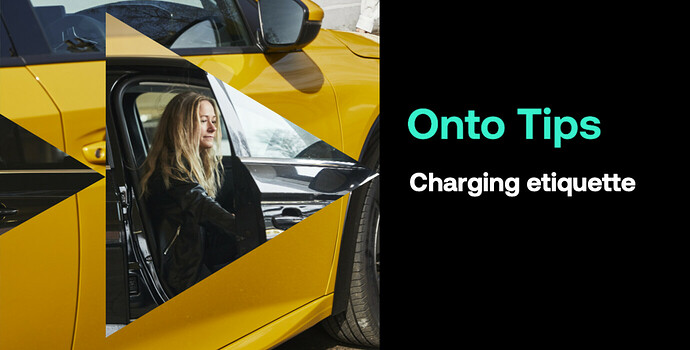 The second instalment of our Onto Tips series is here. If you missed the previous one, we gave you our best tips to maximise your range, this time we’ll be giving you our top charging etiquette tips.

Whether it be helping out other EV chargers, or making sure you never unplug someone else’s car, we’ve put together these tips (including some of the helpful hints from this Community!) to help you navigate public charging. We know charging at public points when you’re new to the EV world can be quite daunting and you may not know the best practices so hopefully this will offer guidance on best charging behaviour.

Let us know any more of your charging etiquette tips below!

Hi all, I know this was discussed a lot in another thread. We listened and our lovely marketing took on the job to get this out to all our customers (email), here and on our blog.

nice work - great to see it!

Unplugging others is ok, if they are fully charged. The plug just comes out easily.

The only time you can guarantee that it will just come out is if the car uses CHAdeMO. That’s the only connector where the lock is controlled by the charger rather than the car. With CCS (All of Onto’s cars) the lock is controlled by the car itself and if you try to pull on it hard you could definitely do some damage if doesn’t auto unlock when charging ends. Most don’t do this as standard.

The kind of person who is inconsiderate enough to leave a car at a rapid charger at 100% is the kind of person that probably isn’t going to be too thoughtful of your needs to charge, nor tolerant of you unplugging their car. It’s an argument (or worse) waiting to happen imo. It also leaves you open to risks of accusations of damage to their vehicle too.

Onto’s advice is good to follow. Either wait, or charge elsewhere rather than messing with other peoples car. Whilst it was standard practice in early days and I used to do it quite regularly, it’s no longer a good idea now.

As long as some idiot doesn’t press stop on the Ionity charger as that will release and stop the charging.

Must people I have come across are helpful and respectful at chargers but you will always get some self entitled ***t who think they can push in, but it’s very rare.