One Year On - what have I learnt 🤔

Just passing that Onto-versary. Y’all probably don’t need my long rambling tale of first year - but on the other hand, maybe it’s of interest to some.

People. Undoubtedly one of the most rewarding part of the Onto experience has been the Community, and the community spirit with people I can class as friends whether virtual or in many cases now we have met several times - you all know who you are. Thank you for the welcoming environment.

Price. I’m drifting into cars above the price point I really wanted to. But then nothing is going to stop me while I explore what the various cars have to offer. At some point I may make a decision as to the one I can live with for some few years. I came to Onto for the Subscription Model - almost above, and without knowledge of, the EV experience - and it was a year ago when the first Onto car was delivered that I first sat in, let alone drove, an EV.

That’s my introduction - coming from a big old petrol slurping W220 S500 Mercedes. A car I quite liked and lived with for 6 years. Prior to that I had owned an Audi A6 (yuk), two TVRs and, in the late 90s a delightful little BMW 318iS. Before that (and since) I’d ridden and owned a few motorbikes and MFW^ liked cars and we had a few interesting ones in the 80s and 90s

Price drove me to think in terms of the known total outlay and convenience against annual breakdown and insurance palaver. Onto was originally a winner when I consider the possibility, at that time, of £300-£350 alone going on petrol for a five litre barge on the equivalent (at the time) 1,000 miles.

But, being candid about it, it is all getting a bit pricey. Onto are, however, a business not any form of charity and I expect them to be profitable like any business, even against the rising tide of costs which we all have to live with. Jury’s out - as they say

All have their good points. Oddly the least impressive to my tastes has been the ID.3. The Hyundais and the Mokka have been eye-openers. I have liked aspects of all. Mrs Beano had a dislike for the Ioniq, though. I see it fondly now!

Away from Onto, I have thrown myself into a few test drives over the months - starting at Fully Charged Live and since:

…and later this week a car I don’t think I will like, but I have a booking for a Tesla Model Y (out of Gridserve, Braintree)

Anyway, Onto car number 5 will be an exciting one however it turns out! It’s due mid-December of course. Christmas-come-Winter-Solstice treat!

Delivering interesting EVs are what Onto are good at and long may they continue to do so!

EV Experience. So the EV-ness of it all was slightly secondary, but then again, do you remember that first moment when you drove and EV and the whole “point” just rushed into your brain all at once? Mine was somewhere between mile 1 and mile 2. I don’t want to go back now, for various reasons drove a couple of hundred miles in a petrol car and did not enjoy it. My experience was also captured in Onto’s interview, which I was happy to give as way of their promotion. Electric Car Subscription in Hertfordshire | Customer Story | Onto &middot; Onto

What’s next. Well nothing is going to keep me from taking trips in the more hard-core EVs since I got sucked in with Onto’s gateway drug, the Ioniq at it’s very reasonable £419. We’ll look back at those days with nostalgia. Mid December is set for delivery of the new Renault… and the intention is to settle in something a bit more modest in the warmer months of 2023.

For some personal reasons, and possibly some “worthy” business-related ones, I’m considering putting together a UK mainland road trip to be memorable. This is potentially for Spring 2023: we’ll see! In any event, first impressions are it could take 3-5 days and involve 2,500 miles and lots of public charging…. Watch this space.

Meanwhile - and until I work out the “ideal” or “least-compromise” car for my use case - it looks like more Onto for a while. They won’t get rid of me that easily!!

And work-wise, I’m finding satisfaction in some ground-breaking time I’m spending with Chargesafe and their pilot to get the whole idea up and running.

As a non-home-charging EV driver I’m getting very familiar with public charging options. Do you remember that first time, too. Now I’m starting to get a bit nerdy, possibly too nerdy at the Volt and Bolt moments. You meet nice people there, too.

It reminds me, every time I plug in, what we’re doing driving EVs in the first place. But often it concerns me that it’s not either a safe or as accessible-for-all experience as it could be. In the rush to get units out there, some CPOs have done better than others in getting all the factors in favour of the average and not-so-average driver. That and EV charging education are a constant thought-pattern in my brain. If you have any jobs for me out there in this area, let me know

I enjoy think about this a whole lot more than my previous work in Financial Services regulation!

Great review from a great guy.

Great reading, you sure love your cars.
Onto your 5th car, just one question as you mentioned MFW, what number of them are you at?

Onto your 5th car, just one question as you mentioned MFW, what number of them are you at?

Swap fees for wives aren’t quite so modest.

Interested what TVR you had? I’ve had a few interesting cars, including one TVR Cerbera which offered a slightly different driving experience to an EV.

I remember a work colleague used to have one of those in the early 2000s. He used to sit there watching it out the office window to make sure it was still there.

Beastly is how I’d describe it.

Loved the Tuscans, I still fancy one as a weekend toy. I pretty much daily drove the Cerbera for a couple of years, got fed up of the dodgy electrics, then upgraded into a Nissan GTR with 700bhp which was more of a beast. Then later “upgraded” to my first EV, a Pug e-208, with Onto.

To be honest I really don’t know what happened to me. Guess tastes start to become more refined with old age

I’m spending with Chargesafe and their pilot to get the whole idea up and running.

The link in your post above has a pic of the Banbury Osprey chargers…. Which reminded me how I often notice that many cars/drivers don’t actually know which charger cable they are meant to connect to.
Seen it many times with 1, 2 or more all connected up incorrectly. Fine if no one else needs to charge, but not acceptable otherwise.

Today I saw 2 cars wrongly hooked up as I drove in, one correct so only one free slot which I took.
Pic of one car wrongly connected… 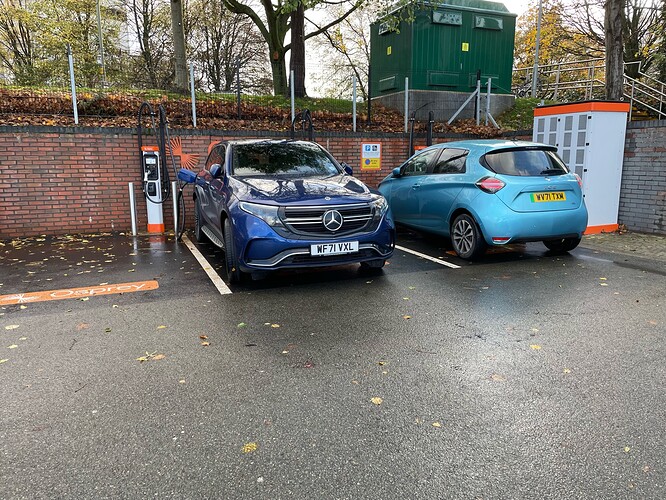 And when I came back a correct config.
That Beamer looks even uglier in the flesh, real shame as it would so much better with a good front end design. 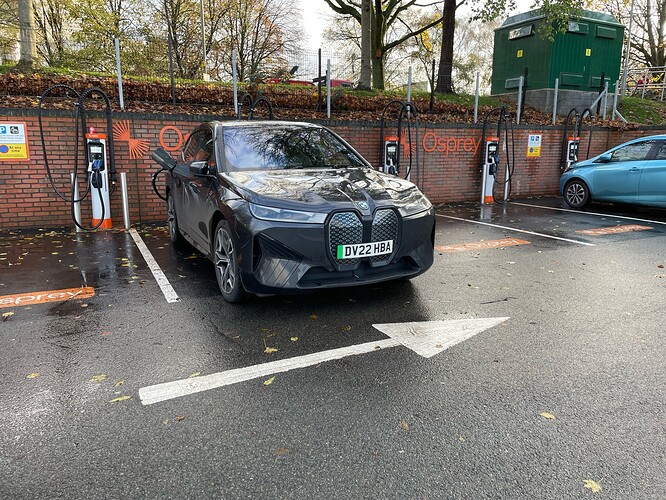 I’ve not only seen that…. I’ve managed to do it myself if one charger won’t start!!

I wouldn’t leave the vehicle unattended if I were doing anything like that. I’ve done that in the Daventry Ospreys too…for the same reasons….RFID wouldn’t start the “right” charger, so I’ve tried the “wrong” one to see if it works and stuck with it

Practical one year on post, thank you, I’m just about to start, but I am a little on the fence due to the charging dramas I hear. Can I ask you, do you use a charger at home?

Good luck with #5…I have to say, I intend to do similar, as what’s the point in the option of swapping if not used… but it is all a bit pricey, as the UK is. (I returned last winter from four years in Germany, where you can have a much better quality of life for less salary, working for a big German brand but international work, coming back here, I left due to Brexit…returned due to family Covid) …forward-thinking business models like this are the way everything will go and, one can hope the prices will all drop eventually. I researched all of Onto competitors and these guys seem the easiest to use, if anyone else knows otherwise, let me know, please.