New affordable EV via ONTO . Mini or BMW I3

After reading the blog there is NO mention or Topic, which will be positive feedback to the company , about availability of good quality/ affordable EV’s from MINI or BMW.

Will be much better option for the customer! Right?! Plus in similar price point per month as DS perhaps.

The BMW i3 used to be in the fleet but was removed a while back. The ID.3 was seen as it’s replacement by most.

I believe it was £469, but if it returned (it won’t, since production is about to end on this model) then it would cost more.

The MINI was apparently ruled out due to its small battery.

My 1st EV was Renault Zoe back in 2018…so I am having good experience with a small range. So, MINI is workable for people without a massive commute.
BMW I3 is best in class. Stopping production by BMW is a ridiculous idea.

My 1st EV was Renault Zoe back in 2018…so I am having good experience with a small range. So, MINI is workable for people without a massive commute.

Most new subscribers opting for a low range vehicle such as a Mini Electric or Honda e wouldn’t have as much experience as you. ONTO are worried that a lot of new EV drivers would be caught out and this first electric vehicle experience could put them off.

@Ivars Looks like you can get an i3 now or a Mini Electric soon, from Elmo. Not cheap though. These prices don’t include charging (extra £10 a month for BP Pulse card) and only 800 miles.

Personally I think you might be surprised by the quality of the e-208. It’s cheaper and has a better range and charges at up to 100kW on DC. 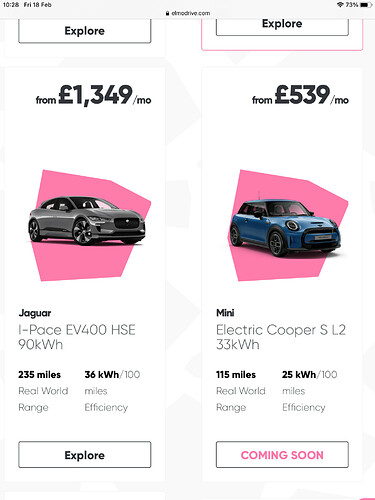 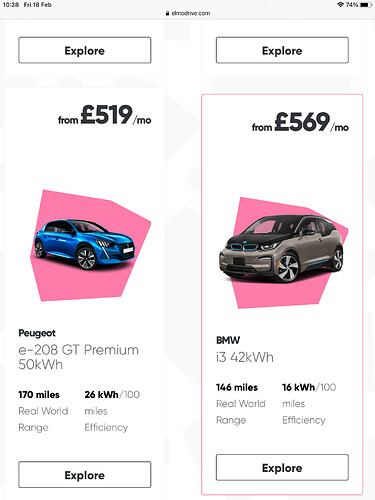 Hire an electric car on a monthly subscription. Save time & money with no deposit or extra cost. Enjoy our all in one subscription model.

Personally I think you might be surprised by the quality of the e-208. It’s cheaper and has a better range and charges at up to 100kW on DC.

The e-208 is a lovely car, I had it for three months and quality was never a concern, it felt well built and drove lovely, a real little go kart.

I only swapped it for the Kona due to poor range in the cold weather, I may very well return to an e-208 when the weather gets better.

Very don’t like this brand. To many compromises. Sorry!

You are correct. This supplier of the subscription service to expensive and offering the same time less!

If I could afford to have a family car and a me car, the me car would absolutely be an electric mini, had one for a 24 hour test drive in October last year, was so much fun

I quite like the MG cars the MG5 ev and the other SUV one. They are cheap, they have high ranges and charge quickly… I know traditionally Chinese products are of variable quality, but I have heard that these are decent cars.

I’ve just cancelled an id3 order and bought the mg zs long range, that’s the suv one you’re talking about, and yes I agree Chinese manufacture quality has come along way in recent years, and most of the European brands are either built in China completely or use many parts that are supplied from China these days