Up north we call it Rain.
Hands free and very environmentally friendly.
It must be the discounted version

When it rains, I quickly run a sponge soaked in shampoo over the car and let the rain rinse it off. The paint work feels much smoother to the touch thanks to the rainwater which is much softer than what Thames Water supply 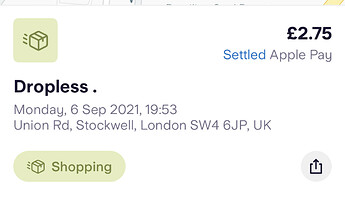 I got my DS3 cleaned just before returning it. A guy in a small van came, he took out a tray and that had a few sprays and a number of microfiber cloths. He sprayed the entire car with that spray and then qiped it with 2 different microfiber cloths.

After that he had another spray for the wheels and sprayed it on it and cleaned it again with 2 different microfiber cloths.

All done in about 45 mins. He showed me his goodies, he had a polishing machine, a hoover. Apparently the guys on the moped carry portable hoovers that can do about 2 to 3 hoovers on a charge and they carry 4 to 5 spare batteries with them.

However, weirdly enough the guy educated me on bird poop

. Told me how on black paint if bird poop isn’t cleaned on time it leaves a mark and actually showed me marks on the DS3 roof which were because of bird poop.

Finally, he gave me some liquid to spray on the car to remove any dead insects from the front of the car and a few microfiber cloths. He didn’t need to do that, he was just being nice since he saw that I was actually interested in maintaining the car.

Thanks for that - sounds pretty good then. Not quite so nervous about tomorrow now!

Haven’t had a chance to inspect it properly but superficially it looks great inside and out. The guy spent spent about an hour and 15 mins on it.

However, weirdly enough the guy educated me on bird poop

It’s always good to get bird droppings off any car ASAP as aside from it not looking great can definitely do some damage to the paint.

At least that’s what my dad told me and I’ve always believed it!

Yep it is. Its acidic, so etches into the paint/finish. Your dad was correct.

At least that’s what my dad told me and I’ve always believed it!

Thats what Grandad says as well.

You are all correct, that’s what led to the paint finish fading on the roof of the car. So it’s always best to rinse of the bird dropping as soon as possible. Waiting for a monthly car wash is not the best idea. Especially if you have a dark coloured car then it damages it even more. Lighter coloured cars are less noticeable

@Pranjal @BillN – on this topic (Dropless) – did your cars have many insects stuck to the front grille?

I’ve got a swap/return booked next week, was thinking of using my freebie voucher to save the hassle of having to scrub off hundreds of miles worth of dead bugs off the front of my car.

I swear when I went to use Dropless a few months ago, they offered an add-on for insect removal, but I don’t see it any more

If your experiences are good, I’ll go ahead with it, otherwise I’ll probably use the other mob from last time as they did a fantastic job.

Hey, I used the voucher which ONTO gave and thats a basic car wash of 45 mins. The guy who did the wash mentioned that they can get off most of them but if you want it to look like brand new then you might need to extend their washing time. They do have a liquid that they use for it. The guy who washed mine was kind enough to offer me some extra to keep for future use. But overall the car was looking on point. He even polished the wheels in that 45 mins. If you have the free voucher then definitely use them and probably just ask the guy to give you an old rag and a bit of liquid and you can clean it off yourself. That liquid also helps to remove any pigeon dropping marks from the paint work.

Be careful of bird poop.
Make sure you soften it before removing it as it may contain bits that will scratch the paint if you just try to rub it off when dry.

If they weren’t already great enough, we’re happy to have the honour of giving select Onto subscribers a free exterior waterless wash worth £22!

Hi @Lily_at_Onto – I just tried booking in my first wash with Dropless, but it says the code I was given is expired or invalid. The email stated it was valid for 90 days (from 12th August) so I should be fine on that front – has anyone had a similar issue, or is there anyone I can ask about re-activating my code?

I’ve got the same issue

Am guessing maybe they weren’t valid for 90 days, maybe 30…

I’ve booked with the same company I used last time but would always love a free clean if it’s on the cards!

I don’t live in London anymore, but I do drive into London for work. I wonder if they would come out to where I park when I am work. I won’t be able to leave a key, but I could remote unlock it when they get there?

Should be able to. They seem to just need the location where the car is parked. In my case I couldn’t get them access to my flat’s parking. So in that case I took the car and parked it on a residential street next door and they cleaned the car there. As for leaving the car unattended as long as its an exterior wash they should be fine if you don’t leave the keys with them. The only thing you would miss out is the interior door trims since they wouldn’t be able to unlock the car but apart from that they should be able to clean it up for you without you being present there.