My first delivery is due today

Its currently 07:52 ive not had a tracking link or any contact so far
(i think im just over excited)

Anything i should be looking out for or does this link normally get sent later on?

Status still says “to be assigned at 9am”

Depending on who is delivering the car you might not get a tracking link at all.

You’ll get a call from the driver when they are a short distance away most likely. But your app and website may show nothing for a while yet. Don’t panic.

Emails are automated, one day before and one on the day of delivery, is what happened in my case back in September.

The next communication will be a driver calling to let you know eta and that’s often half to an hour before.
Just chill and all should be OK as ~99% of deliveries are without issue.

wot u getting and is it there yet?

@Harryfaiz92 - sounds like nerves and excitement may be getting the better of you this morning, it’s not Christmas just yet but totally understandable

Similar to what @Koda & @burnt_crisps2 have said above, you may not receive any messages & the email yesterday from us was an automated one issued 24 hours before scheduled delivery.

We won’t know until after 9am this morning if there are any issues or delays - that’s when the logistics partners send us a morning update. At the point, if we know of any issues, we’ll be making contact with you. If we’ve not been told anything is wrong, you won’t hear from us, as the delivery is on schedule.

On some occasions, we may not find out until later in the day, or once the driver is with the car, or even whilst the driver is on route to you, that there’s an issue resulting in a reschedule - at which point we would be in touch again. Sometimes we’re not told about this until late in the day, sometimes we know early on.

if there are any issues which we’re aware of, we would be in touch ASAP

Until then - no news really is good news - hang tight, this is usually the hardest part - the wait - and please do let me know if there are any issues.

Drivers about 30 mins away i think based on the tracking link.

Lovely car. Enjoy it when it does arrive 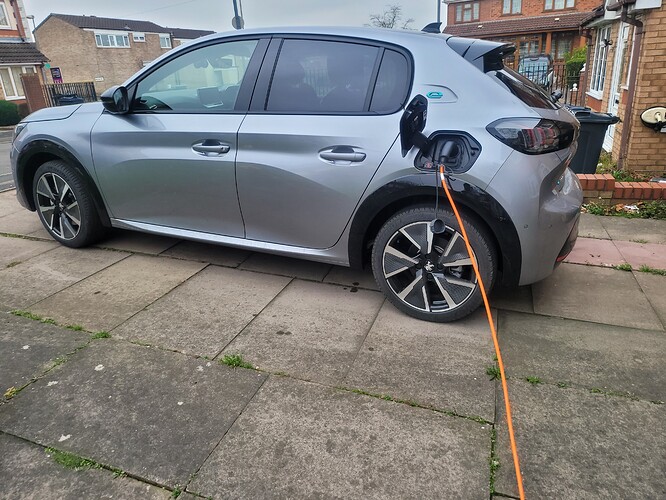 Here it is in all its glory

@Harryfaiz92 - awesome, glad the delivery went to plan & loving the pic - looks mean in that Grey doesn’t she

Ive got it plugged in atm from my 3 pin mains, how do i check charging status on my phone?

You’ll need to download and install the Pug app, then setup the app with the car details, VIN, etc.

If u are new to EVs u will love driving it

That side view looks good!

I tell you, this car looks good from every angle. Not always the case, even with premium vehicles.

There was one parked next to me at the gym yesterday (at the other broken Instavolt) and its a while since I have seen one up close. Surprised how low it is compared to the Zoe roofline, very much like the 205 etc. And yes it looks great from all angles.

Surprised how low it is compared to the Zoe roofline, very much like the 205 etc.

@Grandadgeorgec and myself noted this when our two vehicles were parked side by side.

Not a skateboard design, it’s amazing how Peugeot have shoehorned a 50kWh battery in there. Maybe also explains why the range suffers so much in cold weather. Cells are probably a bit more spread out rather than in one large mass.