I have just swapped to my first non zoe, having been with Onto (well… I actually joined Evezy!) since Jan 2020. I am now the proud driver of a fiat 500e, and having not seen many posts about this car I thought I would put down my thoughts.

It is just me and the wife that use the car (she doesn’t drive), and we mostly use it for weekends out etc. We are probably doing about 1250 miles a month on average, we add bolt ons as we need them for this.

Our last ICE car was actually a fiat 500 twin air, which we had for 7 years before the combination of increasing repair bills and lower usage lead to us selling it.

I had test drove the fiat 500E at Fully Charged earlier in the year, and having seen it again at the recent cars and coffee event, we decided to take the plunge and swap!

So on paper, the Fiat 500E has a lower range than the ZE50, but it does rapid charge faster, so I felt like on longer journeys these would cancel them selves out.

First impressions where good, we went for the Ocean Green colour, which looks great! The interior is modern, has some nice little touches, it has an actually useable glove box (not like the zoe!) and widescreen display works well with Android Auto.

For some reason you need to press the start button twice to actually turn it on, which I am pretty sure wasn’t a thing in the Zoe. And the drive selector are now a series of buttons on the lower centre console, rather than the Zoe’s ‘gear stick’.

In terms of the drive, the 500 is nippy and really responsive, way more fun to drive! It has 3 driving modes, Normal, Eco, And Sherpa. It is a little hard to tell, but these seem to limit acceleration to various levels, with the Sherpa mode having a top speed of 50mph.

Having once been caught doing 27mph in a 20 zone, I had taken to using the speed limiter on the Zoe as a reminder. The Zoe can read the speed signs, but you need to manually set the speed as you go along (yes you can push and hold a button when it recognises a change, but I found that actually it was quicker to just manually change it!).

I was really pleased with the way the speed limiter works on the 500. It too can read the road signs, and it gives you a prompt when it sees a change, and all you need to do is hit the RES button once and it changes the limiter in line with the current limit. So far I have found that the car is pretty good at recognising the signs, as I was approaching a nearby village the other day a tree branch was blowing in front of the 30 sign, and it miss read it as 90. So when I hit the RES button it freaked out and told me that the speed limit was too high! I have also noticed that sometimes on national speed limits, the car seems to be a little quicker to jump from 60 to 70, especially around motorway junctions etc.

I always kept the Zoe in ECO mode, as I found the minus of being limited to around 63/64mph on a motorway was worth the trade off in terms of range. The way this is implemented in Zoe is that once you are in ECO mode, the only way you can get above the eco limit is to push the accelerator all the way down, regardless of how the cruise control / speed limit is set.

Although I suspect that I will stick to Sherpa, I have done some experimenting in different modes in the 500, and I have found a bit of an oddity. When driving without a speed limit set, the car will self limit to 50mph in Sherpa mode. But when you have a speed limit set, either manually or in line with the detected speed limit, the car will happily let you go above 50mph, but beep at you loudly as you do.

I think the biggest learning curve has been locking / unlocking the vehicle. With the Zoe you get a credit card sized (bit much thicker) wireless key, which had all the buttons you would expect to lock and unlock. All you had to do was have the key on you some where, walk up to the car and it would unlock. When you were done just walk away and it would lock and you could even set it to flash and chirp to confirm it was locked. I found this worked great, although there was more than one occasion of the car not locking as expected where I then had to use a process of elimination of removing bags and coats from the car one by one to work out which item contained the key!

For some reason, the good people of fiat have decided to go with a bit of an odd implementation of a keyless system. The ‘Key’ is just a smooth pebble shaped item, which all though it has somewhere to connect a keyring (+1 over the Zoe) it doesn’t have any buttons on it. There is a small button on the drivers side door handle instead that locks and unlocks the car.

I am not 100% if I have got this right, but it seems that you can no longer just walk away, to lock the car you need to actually press the button. It would seam that the range in which the car detects the key is much less than the zoe, for a reliable lock, I have found it best to have the key in the same hand that pushed the button on the door. This is something I have found by trail and error, and actually the process of working this out was quite stressful , on a couple of occasions I was stuck in the rain trying to lock or unlock the car successfully before I realised the trick.

So far I have only done a few little trips locally, and I am sure the SOC is still bedding in, so can’t really comment on the range yet, but I have a trip up north next week, so will report back as to how we find it!

Hope the above is useful to someone, and I would defiantly recommend the swap to anyone who is looking for something a little more fun! As ever, my referral code is in my bio!

Great review on a vehicle that as you say is rarely mentioned on the forum.

I was debating whether to swap to the e500 myself, so found your comments very useful. I’d be coming from an e-208 so wonder whether my experience would be exactly the same as yours. The Pug is a much more entertaining car to drive than the Zoe. It also charges a lot faster.

I think I’ll stick with the 208 for now, as I like the 5 doors and more roomy interior in the rear when compared to the e500.

Let us know how you find the range, especially now the colder weather is fast approaching. If it doesn’t suffer as much in the cold as the Stelantis vehicles, it may be better winter range wise!

It isn’t until you have a more extended drive of a car, have to charge it a couple of times and lock and unlock and start it a few times, that you really start to appreciate some things and find all the little nuances. And those slightly more professional reviews on You Tube are all well and good, but some feedback amongst us “ordinary folks” is far superior.

I really like the idea of the e500, but I fear that two factors will prevent me from ever getting into one (in anger) those being a) my wife probably wouldn’t be keen on what she perceives as a “small” car and b) it might be a bit cramped (having sat in one already - Onto stand at FCL) for my 1.9m height.

Still, it’s good to live vicariously through other people’s experiences

Excellent review of the 500e

Like others I think I am too tall for one at 6ft 2, but do think some of them look cool…

Yes absolutely not a family car! And my brain hasn’t quite got used to 3 doors again yet! Allthough I have found a few more parking spaces I can now fit in which is good! That being said I only realised as I was reversing into a spot the other day that I don’t have parking sensors anymore!!!

I’ve driven a few Arbarth versions, which was a blast and as I’m 6ft 2 surprised it worked fine for me, although it’s definitely a ‘local drive car’ rather than a motorway mile muncher.

I took a 500e round Millbrook track last week and have to say it is one of the funnest cars I’ve drove. I was completely shocked. Sat in it with pre conceptions but it was great to drive really quick and responsive.

If I wasn’t doing so many motorway miles I would 100% take one. It was a super little car.

Thanks for the great review - I have just signed up and am waiting for a 500e to arrive next week - having just given my iPace back at the end of it’s lease, the Fiat will seem tiny but really interested to see how the subscription concept works for us.

just given my iPace back

It’ll be quite a change, but all EV’s are such fun to drive, it will just be a slightly different experience. You’ll have a blast around country roads etc. in the 500.

I took a convertible one for a test drive earlier this year. Really nice car, very nippy and I think the salesperson got a bit jittery as I took it round some of the backroads of Chingford and Buckhurst Hill. Lol. But I’d certainly consider one in London, they’re great and small. On the point of small, I found it a little bit difficult to move about with my left arm with someone sat next to me. I’m a larger guy but not HUGE. I found myself more than usual hitting the person next to me when resting my arm on the arm rest. Much less space width wise than a Zoe. Also for me the seat was right back and I was still feeling like I needed a bit more room around the knees. I’m 6ft and it was feeling like a dodgem. Anyone in the back would have to be a child at my height. Realistically you could only fit 1 adult in the back anyways due to the height of the car when sitting down in the back. Anyone sitting in the back would have to walk if you got your weekly shopping! Haha.
Otherwise I liked the car, if you just commuted to work or had 2 of you going places then it’s fine.

Interesting - at 1.9m it really would be a daft choice for me……

But I’m really itching for one. I’d want to drive LEJOG in it though. Completely impractical.

(I once managed to convince MFW^ to buy a Fiat X1/9 Bertone. Absolute hoot to drive. Rusted while you gazed on lovingly from a distance mind. Turned indicators on and off with a knee. Time and nostalgia has no doubt romanticised the entire experience, sandwiched as it was between a Spitfire 1500 and a 5GT Turbo 2)

@K12Beano lol look at that classy interior don’t make them like that any more #renault5turbo. Bring on the ev edition! 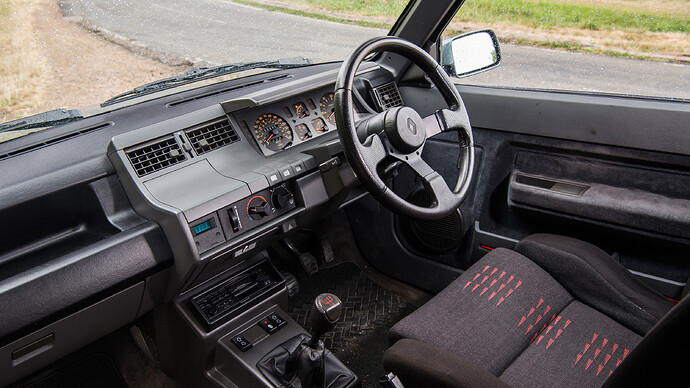 Yup - that’s still a thrilling sight to this day!!