Bonnet... It was a good while it lasted 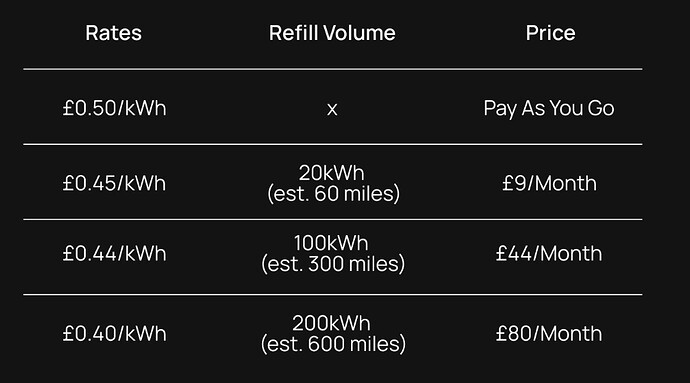 Not surprised by the price hike, but now much less value for money. I suppose it was good while it lasted, I can’t see them continuing to grow as much as they have been with the new prices, it doesn’t make sense to move to them when they are charging more or the same as the operator direct.

Must be tough times for all players in this arena.

We’re all acutely aware that electricity pricing appears stupidly complicated and inexplicably linked to the most expensive input regardless of how much gas is in the mix.

Whilst we’re not immune to it through Onto, I think some of us forget that the price rises are, in part, due to the costs of charging. And we are slightly shielded in the inclusive model.

But it seems like all the CPOs have been juggling their increases. So - to an extent - I wonder if it will settle out that Bonnet actually remain competitive after the next round of increases?

Of course, it could sink them long before that, the way some energy suppliers have got it so wrong…

But - for us - just look at additional mileage rates alone compared to what you’d have to pay “in the wild” - it’s a big proportion of that bolt on!

Will no longer be able to use credit bought in the UK abroad either, I’m not sure I entirely understand that one.

Indeed this makes them much less appealing. I was going to utilise Bonnet when I buy my new car later in the year, but this new structure makes them more expensive per kWh for the local Connected Kerb units than just paying direct. It’s a shame, though the whole market is so volatile currently, who know what the next few months will bring?

The thing to remember is we are at the start of something which has happened many times before, albeit this time there’s also an influencing factor from the prices rising constantly due to pressure from the markets. Price rises from suppliers aside, the public charging companies are at a similar place to all the other pioneers of revolutions. There will be many that don’t make it. The industrial revolution saw the same thing happening and when Henry Ford introduced the production line to vehicle manufacture there was a great deal of resistance to him and it. The old guard were insistent that it could only work their way and at one stage there was something like eight thousand car manufacturers in the US alone. The podcast I was listening to about this said there’s something like eight left now that are of substance. The rest are tiny players.

We’re right at the start of another one of these revolutions with cars and charging networks. There were gold rushes, tulip mania, industrial revolution, computer manufacturers, the Information Age, the movement to cloud computing, and of course now there are renewable energy providers and public charging companies!

Make hay whilst the sun shines they say! In 2008 there was a very innovative startup that proposed to use molten salt as a thermal battery which would have been infinitely more renewable/reusable that actual chemical batteries they received billions in investment but they shut down a few years ago because they didn’t factor in the speed of uptake surrounding technologies. Solar salt battery storage is brilliant but it needs many people to maintain it whereas photovoltaic cells and lithium batteries don’t so the cost of production is cheaper. Much like oil sands and fracking it can only be worthwhile when price per kW is high enough.

Bonnet was good, I was planning on using them when I get my own EV (next week… Always late the race I am!!!) and I do have a subscription that I started last month as I thought this might happen.

Mind you, you can still get juice for 7.5pkW from Octopus I think. Much like driving a car when there weren’t many petrol stations it’s going to still be a case of planning your routes for a good while longer.

though the whole market is so volatile currently, who know what the next few months will bring?

That’s it in a nutshell. Bonnet could well be a good deal for many as all others are likely to be more expensive than they currently are. Just use whatever makes best cost effective sense each month for the next couple of years at least.

Mind you, you can still get juice for 7.5pkW from Octopus I think.

Correct, however the peak rates are circa 35p and come October 2022 likely to be 45 to 50p/kWh.
Anybody switching or thinking of doing so, should ensure they do so before September and at least get a tariff rate fixed for one year, more if possible.

Tesla superchargers in Park Royal (West London) has increased the charge rate from 25p to 59p per kWh, for the first time since it opened this location. Unfortunately, it’s time for EV drivers to feel the squeeze too, unless you have solar panels at home.

They’re trying to force us to cycle. It’# impossible with a grandma who can’t use her legs and a bags of shopping and IKEA boxes