@Rob_at_Onto Having been with Onto previously (asked onto to close my account when left) I wanted to come back and decided the Peugeot 2008 was my choice.
Gave all the info and waited 2 days and got e-mail to say I had failed the affordability check.
My credit rating with Equifax is Good with it only being 4 points away from VERY GOOD.
The email says if you have any questions contact them.
I did and usual Onto no reply, asked again and still waiting on reply.
It is their prerogative who they accept but failing someone on the affordability is nonsense if the don’t ask about income etc.
the car would have been paid out of my wife’s Attendance Allowance as the car is to make it easier for me to get her to her cancer treatments etc.
I even asked Onto if I would pass if it was a cheaper car like the Ioniq, again no answer.
At least I got my refund back quickly.

Affordability checks are sometimes not about how much money you have coming in vs out. But can be totally automated based on AI surrounding your credit record with the various agencies and the risks attached to certain accounts, balances and associated history.

Credit scores mean nothing to anything but the website you’re checking on. It’s just a number. Every company have their own criteria when deciding a pass or fail, and it’s often not something that can be discussed with a customer.

If there’s an UP or a Zoe available in your area you could try an application again, but I suspect it will have no bearing on these checks. Usually it’s as simple as yes or no, and if there was some flexibility there I imagine they would have contacted you to offer a cheaper car - After all it’s not like Onto don’t want to have their cars out on the road with subscribers and bringing in money! Just unfortunately they’re very expensive assets and they have to take steps to manage risk.

As Koda says above, try again with a lower cost car and see if that works as you can always change it. If not then another subscription service might use different credit checks and be a pass for you.

If not then another subscription service might use different credit checks and be a pass for you.

I am with Cazoo with a brand new Ioniq EV at £399 per month.
Due to wife’s ill health she has problems getting in and out of Car.
Cazoo have been great and offered to half my release payment if I find a SUV type vehicle, unfortunately they have none at moment and are unlikely to get any soon.
That is the reason I thought of coming back to Onto.
The Cazoo subscription could be adding to my problem, but can’t afford to be without a car even for a month due to her ongoing treatment.

Bummer. I guess if you hadn’t got them to remove you, then it would have been a doddle.
Guess you removed to protect your identity.

Maybe try Elmo and see if that works, but lack of availability of cars will also be the other key issue.

That is disappointing for sure. For some unknown reason I too get these rejections at times. I make very good money (45% tax bracket), my outgoings are that much smaller than my incoming I usually put thousands into savings, I’ve got an Amex that needs a great score and must be paid in full every month but even so the algorithm doesn’t like me!

I do work in an industry that requires a good credit record so I monitor it to make sure there’s nothing untoward and I got initially rejected for the car I wanted from Mocean. They were very quick with the replies though, the underwriters looked at it and approved it the same day.

I was going to suggest it might be that they only worked on a working day but you said they’ve already given you your deposit back. I did think they had to reply to you though, there was a big brouhaha about credit application refusals that brought about some legislation changes ages ago because ‘computer says no’ isn’t an acceptable answer.

Credit scores mean nothing to anything but the website you’re checking on. It’s just a number. Every company have their own criteria when deciding a pass or fail,

Agree with you on different companies using different numbers.
Onto use Equifax according to them, I subscribe to Equifax and my credit score is good and only a few points from very good, that is the reason I asked for clarity from Onto.
It says in rejection e-mail if you have any questions regarding this decision contact us, still waiting on reply. 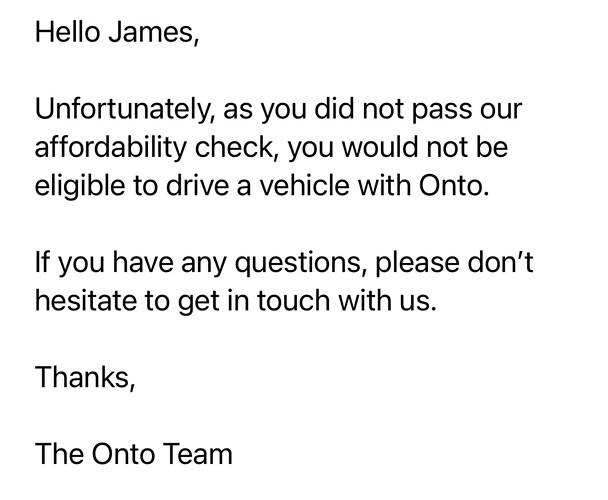 Agree with you on different companies using different numbers.
Onto use Equifax according to them, I subscribe to Equifax and my credit score is good and only a few points from very good, that is the reason I asked for clarity from Onto.

Its not just that Experian have a different number to Equifax or TransUnion. But the fact that that number on Experian is only relevant to Experian themselves. Not even a company like Onto who are checking you via Experian.

Onto don’t see this number when they check you. They don’t make a decision based on any number. But rather they look at your accounts, your payment history, other recent hard searches, what other companies you’ve engaged with financially etc. and Onto make their own criteria to pass/fail a check. Just like Elmo or another competitor will have totally different criteria.

Some of the credit reference agencies give me a fancy number and call my score excellent. But some lenders can and do still reject me at times for various reasons for example because I rebuilt my credit score with the help of a sub-prime credit card which is still on my file and is sometimes frowned upon.

Don’t have a problem with failing, the problem is with Onto.
They say if you have any questions re the decision then contact them.
I have twice and heard nothing, onto CS are total shite and not improving but getting worse it seems by what I’m reading on here.
So much for @Adam_at_Onto improving it

I have a feeling things like this arent something that CS will deal with but it will go to a back office team, to come back with the answers, in exactly the same way other lease / subscription companies and the likes of EE and o2

Also bare in mind its a bank holiday, so most companies back office teams wont be in till Monday …

The other problems is that the CRA’s try and prove your income somehow, from the accounts you have and 99% of the time it fails…

Also bare in mind its a bank holiday, so most companies back office teams wont be in till Monday …

It wasn’t on Tuesday when I emailed them, but will move on with Cazoo at least I’m saving £100 a month on my brand new Ioniq until they get the Kona back in

Are affordability check a recent addition for onto? I’m sure when I joined back in January 2021 there weren’t any

Yes, think it was a few months or more ago…

We love welcoming drivers to our Onto community. Before signing up, it's worth checking that you meet our eligibility and qualification criteria. To be eligible for our service, you must be: 25 t...

@burnt_crisps2 is right this is how we are using affordability @Jimmi1. Onto CS will not be able to give you specifics on why it has flagged that we can not accept you but as per the posting if you contact GBG they can. That said we should have given you that answer immediately.

And just to make life easier. The E-Mail address is:
[email protected]

@Jimmi1 you are right we should have given you the response immediately. Sorry we let you down but from failure you learn. In relation to your comments about Onto CS, appreciate you aren’t happy but our data and csat says differently. I’ve said before, we aren’t where we want to be but we have a path to learn and improve.

appreciate you aren’t happy but our data and csat says differently.

Well that’s one way to upset the person your replying to straight away. lol

Maybe when you’re getting that customer satisfaction training you could ask them about why quoting such things will only further vex the person you are directing it at and everyone else reading it will just see a politicians answer.

@Spud101 No politics, just direct and straight. You may have seen that I’m happy to accept we can get better. I’m open to constructive feedback anytime. Our focus is to listen, learn and get better and better.

No they can’t as I am not a customer of theirs, Onto as a buyer of their services is the customer, that’s according to GBG this morning.
Guess what they tell me to ask you
But I won’t as it is like the funfair, going round and round