I’ve been thinking, I ordered a Peugeot to replace the awful ZE50, that’s arriving in a weeks time.

I’m nowhere near any of the Polar superfast chargers, but I’ve been wondering if the 100KW capable cars charge up faster on a 50kw charger compared to a normal 50kw car like the Zoe?

I’ve noticed if the battery is >40% on the ZE50, it only charges at about 25kwh, so I normally just whack in the type 2 connector and it charges at about the same speed (22kWh) - this stops people stamping their feet and looking at you like “You’ve got 70% SOC so bugger off”.

It’s not really a case of the faster charger support, but more of a Zoe thing. Cars like the BMW i3 or the older 30kWh LEAFs Will quite happily pull a good 45kW or so on a decent 50kW (or faster) rapid charger, and keep going way beyond 80% before really slowing down. It’s just the Zoe that is especially picky when it comes to battery temperature and SOC when plugging in and making a huge difference to charge speed.

Looking online at a graph of the charging curve for the e-208 it looks way better than the ZE50 Zoe. On a 50kW charger you should charge close to full speed to 70-75% (Or on 100kW It will start off fast but by the time you get to 20% it will already start to slow you down and gradually reduce as you take on more charge)

Thanks Koda, I found the charge graphs, looking forward to a decent car

Hey that’s not fair! The older Zoe Q210 would sit at 43KW from 3 to 95%. The Zoe was the fastest charging car - outside of Tesla for years. Its a case of trading cooling vs capacity, the longer range Zoe’s have the same physical battery size so something has to give.

It’s been a while since I last played with a ZE20, Especially one of the Q models, but it won’t have been 43kW to the battery. AC Rapid charging is super inefficient so at full speed you’re probably still only looking at 36-38kW best case from memory.

I used to regularly drive a Q90 and the rapid charging was very much the same as the new ZE50 model even on AC. You had to have a very warm battery, and a very low state of charge. Plug in with 40-50% already on a cold morning and you’ll probably be getting less than 11kW for example. I’d be surprised if the Q210 was much better in these circumstances.

Either way, I would say it is fair. Especially on the Onto forums where they only offer a R110 or a R135. Both of them definitely do have strict requirements to get a decent charge rate.

(PS I don’t think it’s so much about the physical battery size nor cooling. Plugging in with a cool battery, or plugging in with 40-50% charge already would both be scenarios that would mean less heat that charging a warm, empty battery to full. It’s just general Zoe weirdness that slows down these scenarios… And the BMW i3 is an example of physical battery size. They went from 22kWh, to 33, and now 44kWh. If anything the charge speeds improved as capacity increased, despite doubling the energy density)

Looking at EV database, they’ve estimated the e-208’s average charge speed at 50 kW is lower than the i3 I am swapping for it tomorrow. So when I’ve subsequently used ABRP to plan journeys using Polar network only, I’m getting a longer overall journey time - by up to 10 minutes.

Not a big deal in the grand scheme of things but it was a little bit of a kicker given there are barely any 100 kW Polar chargers in NW England where I am. If I remove the Polar filter, there’s more choice so it’s a toss up whether I pay additional and get there a little quicker or just sip my coffee slower during a 50 kW charge.

I think you mean 40kW 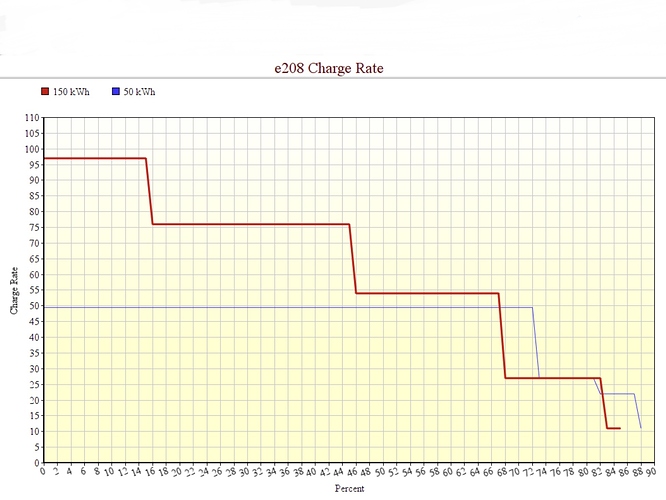 That’s fascinating. Are these charts based on a single charge from 0% SOC? Otherwise the implication of this is that for charging from anything above about 60% SOC you’re better off using a 50kW charger vs 150kW.

good point, no idea how I missed that!